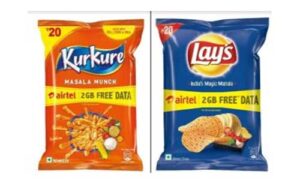 Airtel 4G Data, Airtel 4G, Airtel Free Data, Kurkure Code, Kurkure Airtel Offer, Free Data Voucher — Airtel is running a promotional offer with Kurkure packs offering free data to all purchases. You just need to purchase a chips packet and you get a code which you can redeem for Free Data in your Airtel Number.

This Same Offer is Also Available On Lay’s Chips, Doritos and Uncle Chips

How to get free data from Kurkure Chips Packs —

How to redeem the Airtel Code from Kurkure Pack :

After Successfully Redeeming the Kurkure code in Airtel Thanks is for 3 Days.