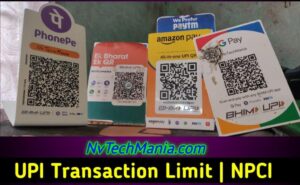 As per today, almost everyone use UPI for online transactions and send money transactions. This is just to improvise the digital world despite using cash in hand. This news may be much beneficial for you. You must be knowing that your bank puts a transaction limit on you ! UPI apps, UPI Transactions, UPI limits, Payment Failure, UPI Offers, UPI Limit exceeded — Hello guys how are you all ? Hope you are all enjoying all the offers and deals posted in our Telegram Channel. In this post we are going to discuss the limits that are set on you by your bank for doing any UPI transactions.

According to the guidelines of NPCI, you will be able to do transactions up to Rs 1 lakh in a day through UPI. This limit may vary from bank to bank. The daily limit in Canara Bank is only Rs 25,000 while in SBI the daily limit is Rs 1 lakh.

Limit on the number of transactions per day

Amazon Pay has also fixed the maximum limit for making payments through UPI in a day at Rs 1 lakh. At the same time, it has kept the limit of transaction 20 every day. Amazon Pay has fixed a transaction limit of Rs 5,000 for new users after registering on UPI in the first 24 hours.